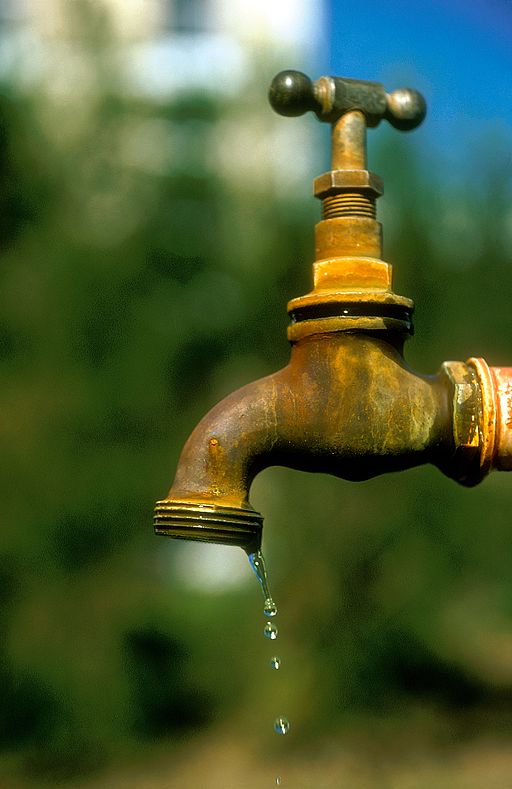 Transmission of COVID-19 likely starts with production of a small droplet that contains one or more SARS-CoV-2 viruses. This occurs somewhere in the lungs, throat, or mouth of an infected person. We have almost no data on this process as it occurs inside the body of an infected person, but we do know how droplets are generally made. One mechanism is named after Lord Rayleigh and Joseph Plateau, and we have all seen it in action. We see it every time we turn a tap a little bit on, and it drips. The stream of water from the tap breaks up into droplets, and the same thing may be happening inside us every time we breath.

The basic physics behind the Rayleigh-Plateau is easy, it is just surface tension and geometry. The surface of all liquids is under a tension that acts to minimise its surface area. A stream of water, or a string of mucus inside our lungs, is a long thin cylinder. This has long sides and so a large surface area. Breaking up into droplets that have larger cross sections reduces the surface area. So surface tension drives this break up. Back in the 19th century Plateau did the first quantitative experiments, then Rayleigh developed the theory.

We are used to seeing it in streams of liquid maybe millimetres or a centimetre or so across but as Plateau and Rayleigh showed, the mechanism is completely independent of size: tiny columns of liquid break up in the same way as large ones*. So it should be the same for strings of mucus only micrometres across in our lungs, as it is for the water coming from our taps. If someone is infected with COVID-19, by chance some of the droplets of mucus will contain virus. These droplets are much smaller than the ones we see dripping from taps, they vary a lot in size but many are around a micrometre across. Droplets that small can be suspended in air for minutes or more, and so form what is called an aerosol. An aerosol is just small droplets or particles suspended in air.

So, this is presumably how virus-containing droplets are made. And it happens every time we breathe. As we need to breathe this information is interesting but not terribly useful in our fight against transmission of COVID-19. But some medical procedures are designated by medics as Aerosol Generating Procedures (AGPs). There is a list of these AGPs on here on the website of Oxford University Hospitals Trust, and many of them are performed on COVID-19 patients. The idea is that a patient being treated with an AGP is producing more aerosol than a patient who is not being treated, and so better PPE is recommended for doctors and nurses caring for patients undergoing AGPs.

The problem is that this is just not evidence based medicine. There is essentially no evidence that AGPs generate aerosols, and indeed evidence that one AGP in particular actually reduces aerosol production. This is distressing. We are 18 months into a pandemic, and we badly need some research not only measuring the aerosols produced, as Hamilton and coworkers have done, but also looking at how an AGP may actually generate the droplets.

* Note that the behaviour of streams etc of liquid does depend on how they are, because gravity has much more effect on large streams than small ones. But the Rayleigh-Plateau mechanism is independent of size.