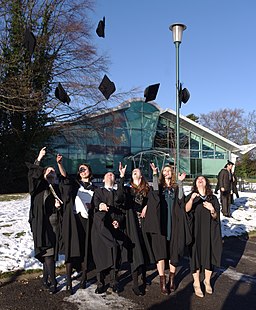 There are many university league tables out there: The Guardian’s, The Complete University Guide’s, The Times Higher Education’s, The Student Hut’s, …. and now there is even a league table where universities from my native Wales take seven of the top ten positions. Congratulations to Aberystwyth on topping that table! It occurred to me that I might as well take this proliferation to its logical conclusion and make league tables so that every university can top at least one table. So without further ado, here is a university league table with Surrey as number one university:

Commiserations to Oxford on just missing out on the top spot. And I don’t want my alma mater, the University of Sheffield to feel left out, so here is one they top:

In both cases I worked with data for the top 50 according to The Guardian’s 2019 league table. The Guardian’s ranking is based on a weighted sum of nine metrics they have for each university. They use a particular set of nine weights to sum up these nine numbers. Then the league table ranking is based on the values of this weighted sum of nine metrics. I simply change these weights to get a different ranking.

For a small sum, I will be happy to generate a league table with your desired university as number one, for use in whatever marketing material you desire. Now that I have taken the proliferation of league tables to its logical conclusion, I would hope that we won’t get any more of them. I fear I will be disappointed.