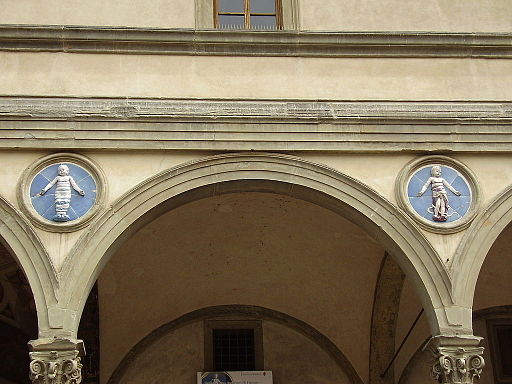 Forty years ago Stephen Jay Gould and Richard Lewontin introduced what they called spandrels, to the field of evolutionary biology. My impression is that this idea has been controversial in evolutionary biology ever since. Spandrels in the original sense of the word are illustrated above. The word spandrel comes from architecture, and basically it refers to the parts of the arches above which have the blue discs with a relief person in them. They are the spaces between the arch and the roof. The point that inspired Gould and Lewontin, is that arches are directly functional parts of archtecture, they hold up the roof. But by their very nature arches leave gaps, that is unavoidable but not directly functional. These gaps can be filled in by spandrels, which themselves are not directly functional — the ceiling will not collapse if they are removed.

Then by analogy, Gould and Lewontin argued some features of living organisms may not be directly functional, may not have been directly selected by natural selection, but instead have arisen as a consequence of the evolution of directly functional features. In other words, evolution selects for an arch, and this creates a spandrel as a byproduct.

I think there is a lot of debate about their idea. For example, I am listening to music as I type this, and some have argued that our appreciation of music is a spandrel, in the sense that natural selection has not directly selected for musical ability and appreciation, but it has arisen as a consequence of natural selection for our big brains. But some may point to Mick Jagger’s eight children, and say that musical ability may have been at least partially the result of sexual selection.

So, the idea of evolutionary spandrels have been around for forty years. A much more recent idea in biology is that of liquid droplets in cells. Liquid droplets in cells are a hot topic in cell biology at the moment. Nature had a news feature on them last year, and there has been a flurry of papers published on this topic, in assorted prestigious journals. Droplets in cells are quite striking as they show up as bright points or regions in fluorescence microscopy — a standard tool in cell biology. But many of these papers only show that these droplets form in cells, they don’t show that these droplets are required for the cell to do a specific function.

So, what if at least some of the droplets in cells are not functional? To form a droplet, a protein just needs to stick to about three or more other proteins   —- three is the magic number needed to form a network of bonds that is needed to hold a liquid droplet together. Proteins often need to stick together to function, so maybe proteins evolved to stick to other proteins, for functional reasons, and then as byproduct of this, some bound to three or more others, and formed droplets.

But a byproduct of evolution is, by definition a spandrel.

Only time will tell whether some of the droplets in cells are spandrels. The flurry of papers reporting their existence is recent, so we are in the early days of the study of droplet-omics*. Hopefully, over the next few years we will work out what these droplets do and do not do, how they help cells function. Then we will be in a better position to understand if some of them are spandrels.

* The fashion in modern biology is to change the end of words to omics when talking about a set of things. For example, one gene but for a sets of genes: genomics, and one protein but for a set of proteins: proteomics. Hence, one droplet, but for a set of droplets: droplet-omics.