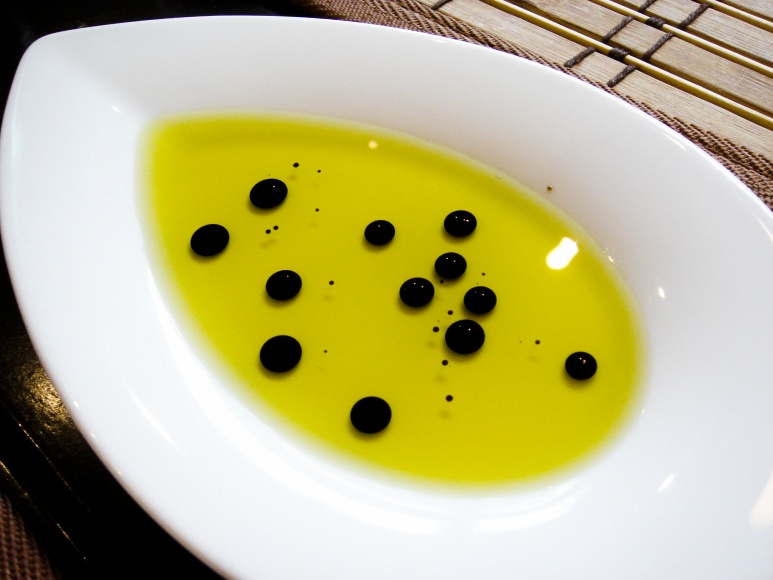 Above are droplets of balsamic vinegar (mainly water, but tastier of course) in olive oil. Water and oil phase separate, hence the droplets. The droplets above are maybe a few millimetres across, and they won’t move unless you stir the oil. This blog post is about much smaller droplets, too small to be seen with the eye, so the picture above of much larger droplets, will have to do. Smaller droplets can move. And two scientists working in Darmstadt in Germany, Hajian and Hardt, have seen small droplets move, which is not so surprising. But what is surprising is that they then dissolved.

Spontaneous movement of the droplets has to decrease the free energy of the system — this is the Second Law of Thermodynamics. Hajian and Hardt assume that the free energy that matters is that of the surface of their droplets, and this is probably right although it is a bit of a delicate assumption.

But Hajian and Hardt did not study a simple oil and water system, they studied a mixture with three components: oil, ethanol (=alcohol) and water, where the oil and water don’t mix, but the ethanol and oil do (ethanol and water also mix of course). They create droplets by mixing water into their oil in ethanol system. Water here is acting as an anti-solvent — a solvent dissolves something, but an anti-solvent does the opposite. When you add an anti-solvent it pushes a dissolved something out of solution to form droplets.

So it looks like the systems with two components, such as oil and water, form droplets that head towards safety, while with three components, oil, ethanol and water, the droplets have a tendency towards self-destruction. All this is a little speculative, as observing these droplets in detail is not yet possible, but although it is not yet possible for scientists to observe this in detail, to have this happen in front of your eyes is easy.

You just have to buy ouzo, or pastis, or any of the many other aniseed-flavoured spirits, and add water. The aniseed flavour comes from a molecule called anethole. Anethole is highly soluble in ethanol, but water is an anti-solvent. Diluted ouzo turns cloudy because of the anethole droplets that form when its anti-solvent, water, is added.