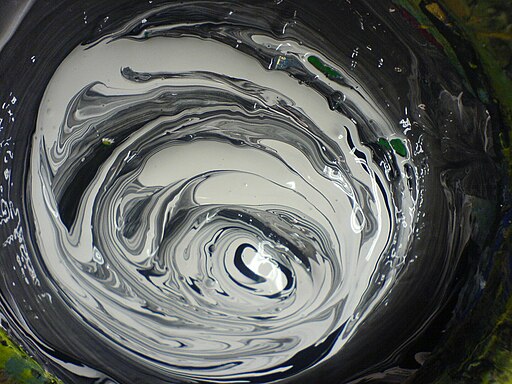 The picture shows what happens when you stir together two viscous (= like honey) liquids together, the liquids fold into each other to form swirls. Here the swirls are visible because the two viscous liquids are white and black paints. It is a nice illustration of the necessity of diffusion (random motion) of molecules, to mixing. The liquids are very viscous, which suppresses diffusion, and so mixing. If the liquids were more like water, which is not viscous, diffusion would blur the white and black swirls into a uniform grey — this is what happens when you mix milk into tea, you start with a pale milky swirl surrounded by the darker black tea surrounding it, before the milk and initially black tea blur into each other.

So, the picture above shows that stirring without diffusion does not mix. But diffusion without stirring is also usually not enough to mix. The time to mix a white stripe with a black stripe increases as the square of their widths, so without stirring you just have a large block of white and a large block of black, and these take forever to mix. Stirring breaks up solid white and black blocks into narrow stripes, hugely increasing the rate at which diffusion can mix.

This is why you stir your tea, coffee, etc. To achieve a well mixed beverage, you need both flow from the stirring, to form swirls with narrow stripes, as well as diffusion across these stripes.