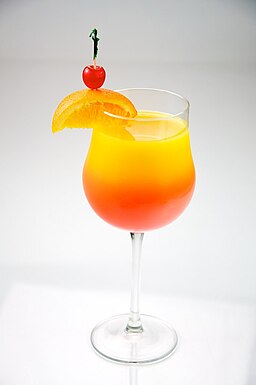 This is a tequila sunrise cocktail, made with 45 ml of tequila mixed with 90 ml of orange juice, which together forms the orange layer on top, plus a layer of 15 ml of grenadine (flavoured and red coloured sugar syrup) on the bottom. The grenadine is carefully added to the bottom of the cocktail, using a spoon to minimise flow during the process of adding the grenadine to the tequila/orange-juice. The red shading into yellow gives the cocktail its name of sunrise.

This post is on why bartenders add the grenadine to the bottom, and why a chambord sunrise cocktail, made with the red liqueur chambord on the bottom and orange-coloured sugar syrup on the top, does not exist. Grenadine contains a lot of sugar, which means it is heavier than water, and than water/alcohol mixtures. Alcohol is actually less dense that water, so alcohol/water mixtures are less dense than water. So, a tequila sunrise with the heavier sugar-rich layer on the bottom and the lighter alcohol-rich layer on top, is stable with respect to convection. Convection is when there is a heavier layer of liquid on top of a lighter layer, and gravity then creates downward flow of the heavier liquid as it falls under gravity.

By contrast a chambord sunrise would not be stable, as then the sugar-rich layer would be on top, and so the cocktail would start to mix by convection, as soon as it is made, spoiling the the pretty layered effect. A back-of-the-envelope calculations suggests that convection, just due to the heavy sugar syrup on top, would mix a chambord sunrise in about an hour. Convection due to temperature differences would probably speed this up. In contrast, in a completely still tequila sunrise, it would take about a week for diffusion alone to mix the layers. In practice, it would be very hard to avoid all flow, for example, ice cubes will float at the top and this will tend to create temperature variations which will also mix the layers.

Anyway, although cocktails are of course important, they are just one example of where we need to be mindful of convection. Anytime we mix volumes of heavier and lighter liquids, convection will occur, unless the lighter one is on top, or the volumes of liquid are very small (about a thousandth of a millilitre or smaller). The first step in growing protein crystals is often mixing a lighter solution, a solution of the protein itself, with a heavier solution, typically a salt or polymer solution whose job is to trigger crystallisation. So, in the absence of sponsorship from a cocktail bar*, and as I do have funding to study protein crystallisation, as part of an EU-funded network, I am mostly studying the mixing of these solutions, but the physics is the same.

* Own a cocktail bar? I am happy to work for in-kind contributions.