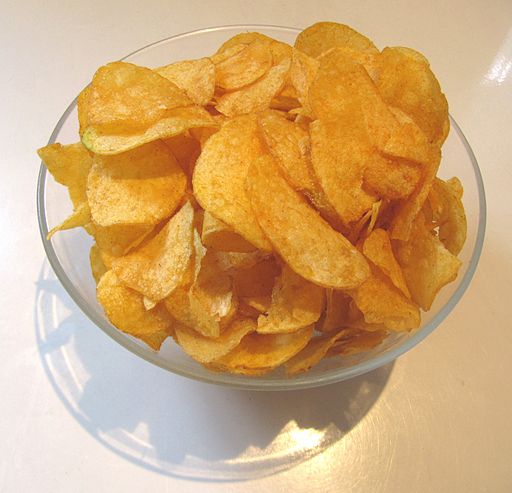 I have just gotten back from the 3rd Sir Sam Edwards – New Horizons in Soft matter meeting. The meeting has an emphasis on bringing together soft matter scientists from universities and companies. As a university-based scientist it is fascinating to hear of the soft matter challenges companies face.

These vary from turning tons of potatoes into crisps, to making cosmetics that are sold for silly money.

A crisp starts off life as a slice of potato about 1 mm thick that is fed in raw to an industrial fryer, and emerges 3 minutes later as a cooked crisp. In that 3 minutes it has lost almost three quarters of its mass. It goes in about 75% water and leaves as about 2% water. Potatoes are mainly water and crystalline starch. Starch is a plant polymer made by plants stringing together sugar molecules, and in potatoes the starch molecules are crystalline, they are packed into regular arrays.

In the fryer the oil is well above 100 C, and as the potato slice is so thin, seconds after it enters the fryer it reaches about 100 C. At about 100 C, the water boils and comes out of the cooking slice of potato — this process is bit complex and poorly understood.  The water may be leaving the potato as bubbles of steam but crisp makers don’t appear to have good data here. At 100 C, the water/starch mixture inside the potato is molten, the starch crystals have melted in the heat.

So as frying proceeds the slice loses more and more water, while remaining at around 100 C. Now at 100 C, if the starch contains at least around  5 % water, it is liquid. But when the water content drops below about 5% the starch and water goes from a liquid, to what physicists call a glass. In this context glassy starch is starch where the starch molecules don’t move, they are fixed in position like in a crystal, but unlike in a crystal they are not arranged in a regular array.

Glassy starch is solid, and a crisp is basically a thin disc of glassy starch. So the potato slice emerges from the fryer having lost almost all its water and with its crystalline starch transformed to glassy starch. There is chemistry going on, I guess some small amounts of chemical breakdown of the starch also occurs, that gives flavour. But the physics of frying is essentially water loss, plus a crystal-to-glass transition of the starch.

I found this fascinating, but I guess crisps are rather low-brow soft-matter physics. If you want high-brow soft-matter physics, one of the speakers, Jerome Bibette, is cofounder of a small company called Capsum, which works with a company called La Prairie, to make unfeasibly expensive skin care products. Bibette is a microfluidics expert, in particular on making small (typically millimetre or less) gel-coated droplets, which have a number of uses including in very expensive skin creams. I am not sure that cutting-edge soft matter physics is truly essential to La Prairie’s business model, but if you want evidence that money can be made from soft-matter physics products then La Prairie’s products are certainly expensive enough to show that some people are making money from physics.