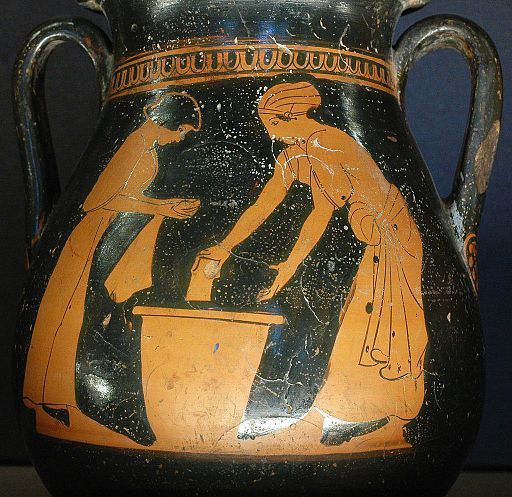 Few things are more boring and take less thought than putting a load of washing in the washing machine, but there is a lot of physics and chemistry going on inside washing machines. The basic idea is remove stains and dirt particles from your clothes, and to then carry them away down the drain. To do this washing powders and pods contain surfactants (soaps) to help detach stains and dirt from clothes, but then these molecules and particles must be removed from the clothes, and washed away.

Clothes cause particular problems for the second step. When washing dishes such as plates, as plates have smooth surfaces, as soon as the dirt is dislodged from the surface of cup or plate, then water flow along the surface of the plate will carry it away. Clothes are different, as they are woven from fibres of cotton, wool, etc. Inside these fibres are tiny gaps much less than a millimetre across, and water flow does not penetrate there.

This is problem: If the water is still, how do we get small dirt particles out from inside these tiny gaps? Shin, Warren and Stone have an answer. It involves what is called diffusiophoresis: the motion of small particles (here the dirt) due to a gradient in the concentration of molecules in the water. Here these molecules are the surfactant, which involves a negatively charged molecule, often dodecyl sulphate, which sticks to the dirt, plus a postiively charged ion, typically sodium. Sodium dodecyl sulphate (SDS) is a very common surfactant, if you look at the ingredients lists, you’ll almost certainly find that you have some in either your kitchen or bathroom.

When the rinse cycle of the washing machine starts, pure water is pushed through the clothing, although not through the smallest gaps. But the small dodecyl sulphate molecules, and especially the very small sodium ions diffuse out of these gaps. As they are so small, sodium ions can diffuse out of the small gaps in fibres, whereas the much larger dirt particles cannot — at least not during the ten-minute rinse cycle of a washing machine.

So the sodium ions diffuse out of the gaps, leaving the bigger dodecyl surfactant molecules a bit behind, and the much bigger colloid particles far behind. But then you have a positive solution outside the gap, and negatively charged dirt particles inside the gap, at which point electrostatics comes to your aid. The positively charged rinsing solution pulls the negative-charged dirt out of the gap, because positive and negative charges attract. A cute mechanism, and one that presumably we have always relied on when washing clothes using soaps.

We have been washing clothes for thousands of years — the vase above shows clothes being washed and is from the fifth century BC. Despite this long history, we are still learning basic things about how washing clothes works.