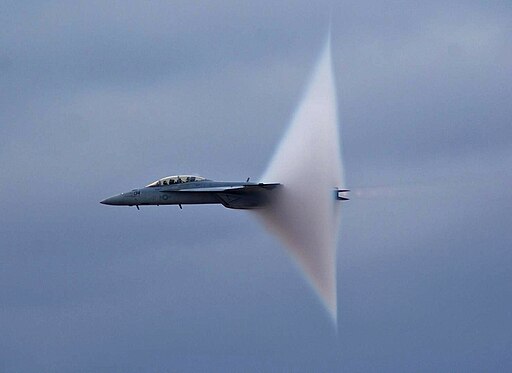 A lot, maybe most, of the fun behaviour that occurs in physics is controlled by dimensionless numbers, i.e., quantities that don’t have units such as metres or seconds. These dimensionless numbers are typically ratios between two quantities. Each of the two quantities has the same dimensions (units) and so these units cancel, making the ratio dimensionless. There are many of them in physics, but perhaps the only one in common use is the Mach number — named after the German physicist Ernst Mach. The Mach number is the ratio between two speeds, the speed of an object, often an aircraft as above, and the speed of sound. When the Mach number is greater than one, the plane is supersonic, and when it is less than one the plane is subsonic.

The picture above is of a plane just breaking the sound barrier, so its overall speed is close to the speed of sound. The flow of air over the surface of the plane is not all at exactly the same speed so in some places it is a bit faster than the speed of sound, while in other places it is a bit slower. This variation in speed near the magic Mach number of one, can create quite complex behaviour in the air flow.

Normally, as air is transparent, complex patterns of air flow are hard to see. But if we are lucky the air is humid, and then when the air flow in a particular spot causes a drop in pressure, a little cloud will form. The reduction in pressure causes cooling which in turn causes many small water droplets to condense out of the humid air, forming the mini cloud.

In the picture at the top a beautiful conical cloud has formed due to the air moving at speeds near a Mach number of one. This is a lovely illustration of a beautiful physical phenomenon, which we can understand with a simple number.