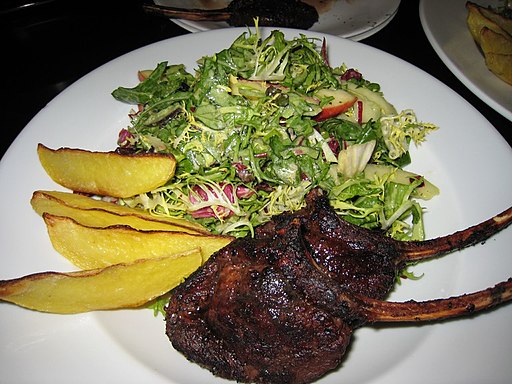 I am on record as saying that evaporation is one of the big challenges in physics. As further evidence to support this, I give you the potato wedge. Note that the potato wedges shown above are crispy and burnt along their top edges. This blog post is about why this is.

A French physicist called Lyderic Bocquet suggests that evaporation is to blame. When potato wedges are baking in an oven, then the wedges are of course in a hot environment, and so during baking they lose water via evaporation — potato wedges contain a lot of water as most food does, and some of this is lost while cooking.

Evaporation can be complex, but to make progress we can assume that near but outside the surface of the wedge, water is moving away from the wedge by diffusion — at larger distances it will move by convection but let’s focus on near the surface of the wedge for now. Then when the rate of evaporation is constant, the equation which describes diffusion, reduces to a familiar (differential) equation in physics: the Laplace equation, named after Pierre-Simon Laplace.

I teach the Laplace equation to second years. To recap, here we want to solve the diffusion equation outside a wedge where the sides meet at an angle α. For the wedges above the angle α is around 30 degrees or π/6 ~ 0.5 radians. For the formulas below we will need to work in terms of radians.

If we solve this equation for water vapour concentration just outside of and along the edge of a potato wedge (i.e., along the dark crispy line of the wedges above), the important bit of the solution of Laplace’s equation looks like*

where c(r) is the concentration of water vapour at a distance r from the tip of the edge of the wedge. Now cSAT is the amount of water in water-saturated air but it is constant so it is not the interesting term. The interesting term is the second one because within Bocquet’s simple model, this term is responsible for the crispiness. The second term has a power law dependence on r; c1, is just a constant that gives the size of this term.

The rate of drying out of the potato wedge is proportional to the derivative** of this concentration. Taking the derivatives decreases the power of r by one (and eliminates the constant term), and we have that the

where I have put a typical value of α = 30 degrees or 0.5 radians in the formula. The point here is that the exponent is negative, it is − 0.4, this means that as we approach the edge of the wedge the drying gets faster and faster. If we halve the distance to the edge, the drying rate becomes 20.4 ~ 1.4 times bigger.

So the closer to the edge a point on the surface of the wedge is, the faster it drys. As a result, the final baked potato wedge is crispiest along the edge. This is a general result, edges and points crisp the most, and the explanation is a straightforward application of second-year maths.

** For those of you who know about these things, the rate of drying is just the diffusive flux of water, which is proportional to the gradient in water concentration.