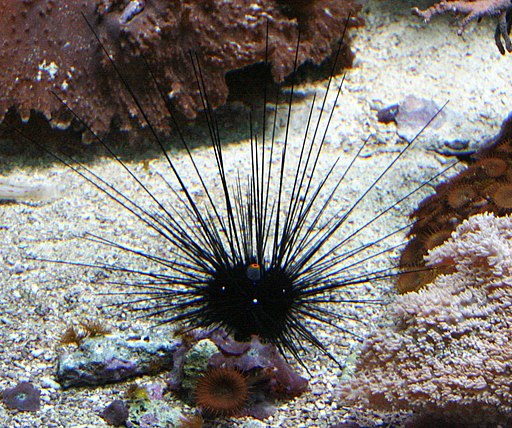 This is a sea urchin, sea urchins can’t move fast so rely on these spines and the fact that they have a hard shell, to protect them from predators. Both the spines and the shell are made from crystalline calcium carbonate in the form of a mineral called calcite. Scientists have long been fascinated by how animals such as sea urchins grow these calcite crystals to form these striking spines.It appears that the sea urchin creates what is basically a cell-membrane-bound sack that is initially full of water and some proteins, it then pumps calcium and carbonate ions into it. The calcium and carbonate concentrations shoot up, but crystalline calcium carbonate is not the first thing that forms. First what is called Amorphous Calcium Carbonate (ACC) forms, this is almost as dense as calcite but is not crystalline.

Or more precisely, ACC does not have the regular planes of calcium and carbonate ions that calcite does. We can tell this from X-ray diffraction experiments on ACC. But we have only a very poor understanding of how the calcium and carbonate ions are packed together. One possibility is that the ions are packed together in a liquid, in other words, at a high density but pretty randomly. But there is a second possibility, which is that they are packed into a mess of tiny nanocrystals.

These nanocrystals are too small to be picked up by X-rays. But if they are present the formation of calcite from ACC is not the appearance of a crystal in a liquid, it is the growth and coalescence of many tiny crystals into one big one. We know sea urchins have impressive control over this process, but we are still a bit clueless about how it takes place. The process involves movement of ions over very small distances and we don’t have the experimental techniques to follow it.