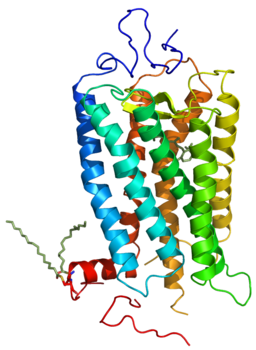 Right at the beginning of this year, I was on a bid for EU funding, to develop new approaches in crystallising membrane proteins (an example membrane protein is shown to the left). The proposal was submitted in January. At the start of May we found out were on the ‘reserve list’, whereupon we assumed that that was it, we were unsuccessful. We exchanged gallows-humours jokes about feeling like an Olympic athlete who finishes fourth, and just misses out on a medal. A bit later we found out that the success rate was about 6%,  apparently we were part of the 94% who failed. Six months has now passed since we learnt this, and we heard nothing from Brussels.

For this sort of bid to the EU, there are annual deadlines, so were just starting to get into gear to write a new bid, by a January 2017 deadline. Because of this when I got a bunch of weird bureaucratic emails from the EU this morning, I assumed that they were just paperwork stuff to do with the new bid.

But no, it was EU’s obscure, bureaucratic, way of saying we were being funded! After 6 months sitting on a reserve list, somehow we were now being funded. I couldn’t believe it at first, but it seems to be official. So, next year we will taking on 12 PhD students across Europe, including one at Surrey.

I can’t wait. It is a good team, with some really interesting problems to study. If you are graduating next year, and are looking for a PhD opportunity then maybe bear us in mind. Roughly one in three of our proteins are membrane proteins and many drugs target them, but we can’t make most membrane proteins crystallise, and without crystals X-ray diffraction can’t give us beautiful and very informative structures like the one above. We’re going to try to work what is going wrong in attempts to make these crystals, and hopefully come up with better ways and more structures like those above.