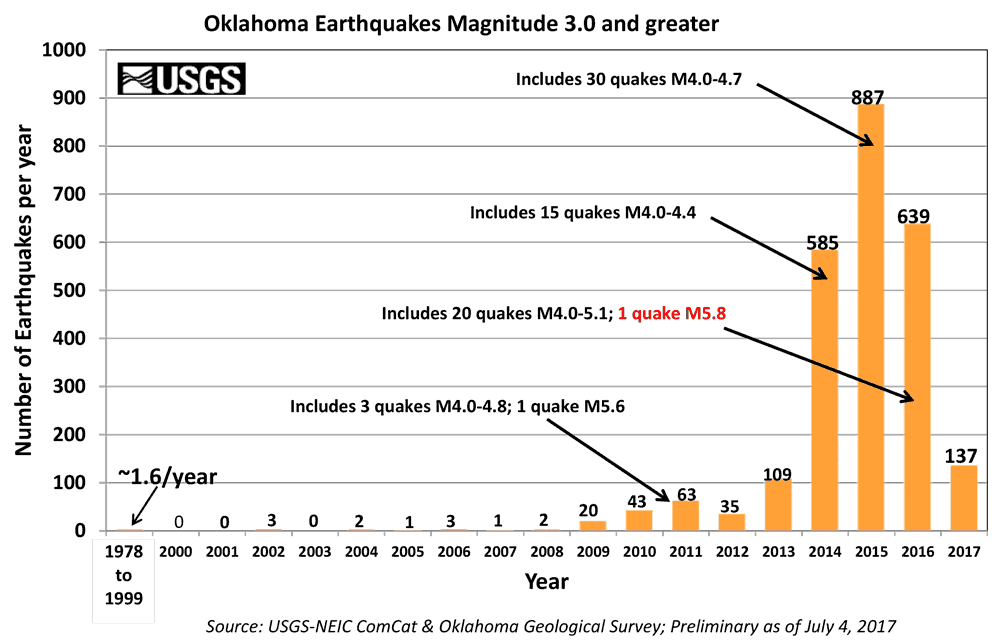 The graph above shows the numbers of earthquakes in the US state of Oklahoma, for each year from 1978 to 2016 (2016 data is only up September). The number is for earthquakes with magnitude greater than 3.0. There is a striking increase from 2008, when there were 2 earthquakes, to 2015, when there 890.

However, in 2015 according to the press secretary of Oklahoma senator, Senator Inhofe, “While there has been an increase in activity over the past year, the data on earthquakes that is being examined only goes back to 1978. Seismic activity is believed to to have been going on for thousands of years in Oklahoma, so looking at just the last 35 years to make definitive conclusions about trends … is short sighted. We shouldn’t jump to making rash conclusions”. This was communicated to Howard Wainer, and is from his entertaining book Truth or Truthiness, Distinguishing Fact from Fiction by Learning to Think like a Data Scientist.

On looking at the graph you will probably not be surprised to learn that some geologists are at least contemplating coming to some “rash conclusions”. Clearly the number of earthquakes a year was steady at around 1 or 2 a year, until around 2009 when the rate started climbing rapidly.

Oklahoma is now a site of extensive fracking. The biggest earthquake was triggered by a smaller quake that started with “the tip of the initial rupture plane is within ∼200 m of active injection [of fluid at high pressure] wells” according to some recent work. Earthquakes are tricky to understand, and establishing cause and effect is tricky. But Senator Inhofe’s press secretary is talking nonsense. There is something going on under Oklahoma, and the huge rise in the number of earthquakes since the advent of fracking looks unlikely to be a coincidence.