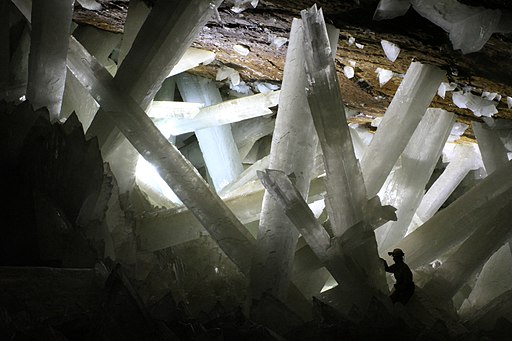 Above are crystals in a cave in the Mexican state of Chihuahua. They are huge, note that the person in the picture shows the scale. The crystals are up to 10 m long, have masses of tens of tons, and are made of gypsum, a form of calcium sulphate. It is estimated that they took hundreds of thousands of years to grow. So around about the time our ancestors were wandering around Africa, a tiny nucleus formed, and started to grow. Hundreds of thousands of years later, we have these enormous crystals.

This is one end of the scale range, at the other end are many substances that never form crystals bigger than around 10 nm, i.e., a billion times shorter than these crystals. As mass varies as length cubed these tiny crystals are a factor of about 1027 times lighter than the crystals in the cave. Why the difference?

I think the short answer is: We don’t know. But we do know some things about crystals form.

The crystals above presumably relied on conditions for crystal growth being constant in a small sweet spot for growth, over enormous spans of time. I should say that until around 10 years ago the cave above was full of water, all the crystal growth occurred from solution. My best guess would be that for some reason conditions in the cave were stable over huge periods of time, with a roughly constant and small amount of calcium and sulphate dissolved in the water, and a roughly constant temperature. The cave is 300 m below ground, which would have protected it from the seasons and weather.

If over the hundreds of thousands of years the concentration of calcium of sulphate dropped too low the crystals would stop growing and start to dissolve. So, too frequent and prolonged drops would not have allowed them to grow to their huge size. But if the calcium or sulphate concentration got too high, the growth of the crystals would have not been as perfect as it clearly was — see the beautiful straight lines of the crystals above! And other crystals could have nucleated, i.e., we would set many small crystals not a handful of huge crystals.

Crystal growth can also be affected by impurities, so the chemical composition of the solution in the cave cannot have varied too much. All in all, I am bit gobsmacked that nature has conspired to keep conditions near perfect for crystal growth over an entire ice age and more, when scientists have to work to keep them near perfect for just one day.