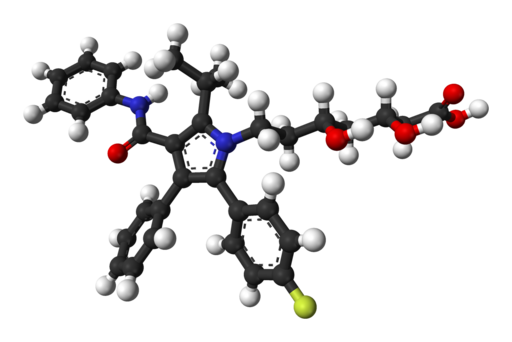 Lipitor is a cholesterol-lowering drug sold by the pharma multinational Pfizer. People who want to lower their cholesterol take it every day for years or decades. High cholesterol is a common problem, bacon and cakes are just too tasty, and so the market for drugs like lipitor is absolutely enormous. It has been estimated that over fifteen years, Pfizer made $125 billion from lipitor. That’s a lot of money. I don’t have the figures but presumably a billion plus of that was in the UK (i.e., paid for by the NHS). So if you are a taxpayer even if you haven’t taken it, you’ve paid for it. So I’ve paid for it, but I am also interested in lipitor as I study crystallisation, and like most drugs lipitor tablets contain the drug in crystalline form.

Lipitor is the molecule atorvastatin (shown above), which works by inhibiting an enzyme in the body that makes cholesterol. This lowers the amount of cholesterol in the blood, and so the risk of heart disease. Atorvastatin can crystallise into over ten different types of crystals, called polymorphs. Most molecules can form more than type of crystal, but atorvastatin seems exceptionally prone to forming many different types.

So Pfizer’s scientists had to coax the molecule into reliably forming one of these ten plus types of crystals, in order to make a saleable drug. Which Pfizer then sold for over $100 billion. No wonder pharmaceutical companies really care about crystallisation.