This is an animation of a rotating cubic box containing a few thousand molecules. It is from computer simulations by James Mithen, who postdoced with me. Most of the molecules are in one of two different crystals, the yellow ones are in a type of crystal called a face-centred cubic (fcc) crystal, while the green ones are in a different type of crystal called body-centred cubic (bcc). Both are crystals in the sense that the molecules are arranged in a regular lattice but the two lattices are different, for example, in the fcc crystal each molecule has 12 neighbours while in bcc each molecule has 8.

The first bit of the animation shows all 5000 molecules including a few that aren’t in a crystal (blue) plus some in a third type of crystal (dark orange). Then it shows the configuration continuing to rotate before your eyes but only showing the yellow fcc-crystal parts, and then after that only the green bcc-crystal parts. You should see that in both cases some parts of the box are filled with that crystal (if you look closely you can regular planes of molecules) while other parts are empty. The empty parts in the fcc-only part of the animation are mostly filled with bcc crystal, and the empty parts in the bcc-only part are filled with fcc.

The two crystals combined almost fill the box, but they do so as two interpenetrating networks, each of which is nowhere more than around 10 molecules across. Overall, the state does not look crystalline, according to the standard technique we use to identify crystals, X-ray diffraction, despite being a mixture of two crystals. 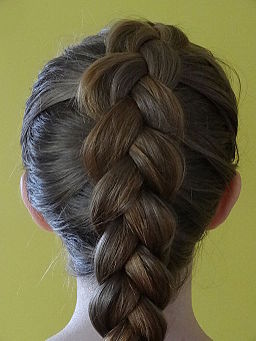 My then postdoc James came across this state more than a year ago, and I am still puzzling over it. Although you can’t see this in the animation, there is only one fcc crystal and one bcc crystal in the box, but they are twisted around each other like braided hair.
These ‘braided’ crystals also remind me a bit of states seen when some types of soap-like molecule are added to water. You can get a state with interpenetrating networks of water channels, separated by a layer of the soap-like molecules. I’m taking a look at work on these states, to see if there are interesting ideas that I could use, to help me work out what is going on.