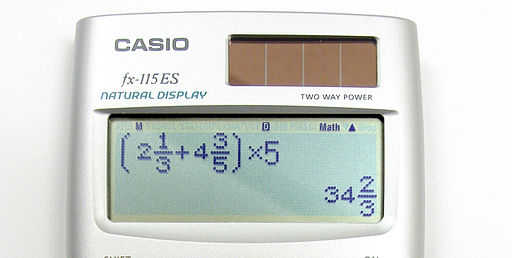 The calculator to the left is solar powered, via the little solar panel at the top right. Small cheap solar panels like those in calculators are made from amorphous silicon, because its a lot cheaper than its more efficient but pricey, cousin crystalline silicon. In crystalline silicon the silicon atoms are arranged in a regular crystal lattice — as it happens the arrangement is similar to that of water molecules in ice.

As far I can tell, we don’t know for certain what the structure is of amorphous silicon like that in solar-powered calculators. This may matter, as it will be hard to improve the efficiency of power generation in amorphous silicon solar panels if we are clueless about the arrangement of atoms in them. For a calculator efficiency is not so important, they only take a tiny amount of power, but if we are going to generate large amounts of power from large solar arrays then efficiency really matters.