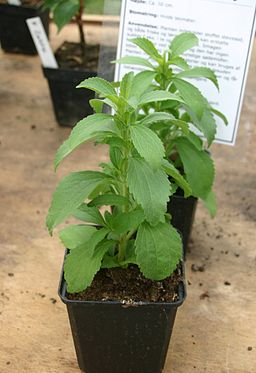 After years of being dimly aware that there are two types of diet Coke*, the Coca-cola company has decided to further confuse me by launching a third: Coke Life. Coke Life’s tag line is “sweetness from natural sources”. The source is shown to the left, it is the stevia plant. This produces an extract, also called stevia, that contains a bunch of molecules called steviol glycosides, that taste very sweet, so only small amounts are needed to sweeten drinks. So although if you drink Coke Life your body will metabolise the steviol glycosides and so produce energy, as such small amounts are needed these calories are pretty negligible.

Diet Coke is mainly sweetened with aspartame, which is a dipeptide of the amino acids aspartic acid and phenylalanine, with a chemical group called a methyl ester stuck on part of the phenylalanine half of the molecule. Now peptides are just short proteins, and so your body is full of them, some of which will be chemically modified. On reading the Wikipedia page it looks like aspartame is chopped up in your intestines, I guess this is not a surprise, digesting proteins and peptides is one of your digestive system’s main jobs. And it has been tested and found safe.

But it is made in chemical plants, not in plants with pretty green leaves like the one above so I guess it does not qualify as “sweetness from natural sources”. Given that aspartame is close to being a very small protein, this seems a bit harsh on aspartame, but there you go. You actually require phenylalanine in your diet. Anyway, it looks like aspartame has been tested a lot more thoroughly than the more recent stevia, so when you want a low calorie drink you can choose between the well tested product of stainless reaction vessels, or the less well tested product of the pretty if nondescript plant above.

* Apparently Coke Zero is a diet Coke marketed largely at men who want a diet Coke but are put off by the name Diet Coke as they do not like to think they are on a diet.