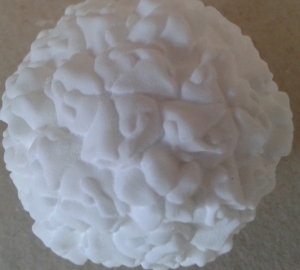 At a workshop I was at in Princeton in April, one of the speakers illustrated a rather beautiful state of matter called the gyroid phase, by passing round a 3D printed model of this state of matter. I was instantly both impressed and envious. There is a cool gif of the gyroid here, but holding a model in your hands and turning it over to see it from all angles, is better than any picture on a 2D screen.

Clearly this idea of passing round structures is worth copying. Every autumn, I teach biological physics to third year physicists, and I show them pretty pictures of the shells (called capsids) of viruses. This goes down well. But this autumn I will give them a model of a virus – the one shown above.

The picture is not the best but just below the middle and slightly to the right of the centre in the picture you can see a five-fold arrangement of the proteins that make up the protein shell of the virus. This elegant arrangement is one of the reasons physicists and mathematicians are typically impressed by viruses. Many viruses, like this one, have beautiful symmetry. This virus has the symmetry of an icosahedron, so it has precisely 12 of the fivefold elements you can see above.

The virus is a rhinovirus. This is the virus that causes colds, so using it in teaching in the autumn is good timing. The rhinovirus will probably not be the only one in the room, at least one poor person will have a few billion of the real thing up their nose.

I did not make the file needed to 3D print the rhinovirus. I just downloaded a file from a page on the virus on the Howard Hughes Medical Institute site. Basically, just like there are file types for 2D images, like jpg and png, there is a file type called stl for 3D objects. Files in the stl format just express the surfaces of objects as a whole bunch of triangles — I think this is how computer graphics  for making 3D worlds as in Shrek etc, works too.

Then I just sent the stl file to a 3D printing company. Two weeks later, I got the cool 3D-printed virus in the post. This cost me about £20, and its about 5 cm across.. Cost scales as volume so it gets pricey for big objects but £20 for your own small model virus seems decent value to me. Hope the students will like it.