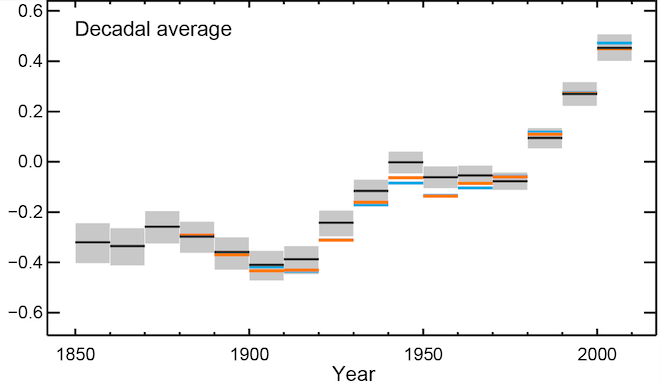 On Tuesday I went to one of the general evening physics run by the local group of the Institute of Physics, mainly Paul Stevenson and others on the committee. Future talks here. It was on climate change and the figure that really stood out for me in the talk is above. It is taken from the newly released physical science bit of the 5th report of the IPCC (Intergovernmental Panel on Climate Change). Basically it shows the temperature averaged over the whole of the Earth and over a decade of time, as a function of time. I.e., the average temperature in the 1980s, in the 1990s, etc. The y-axis is in ºC and is I think the difference in temperature in a decade relative to the average temperature between 1961 and 1990.

The trend over the last 3 decades is pretty striking.

The talk was by Emma Suckling, who did a degree in the Department then a PhD in nuclear physics with Paul, before switching to climate modelling. It was interesting to hear what she was doing: developing and carefully testing models for global temperatures. Judging from the image above, we will be needing these models. It was also rewarding to see a student you have taught do so well that they are the front of the lecture theatre doing the talking while Paul, I and the others were doing the learning.